How is Aesthetic Art created from the Litters of the Mount Everest ? 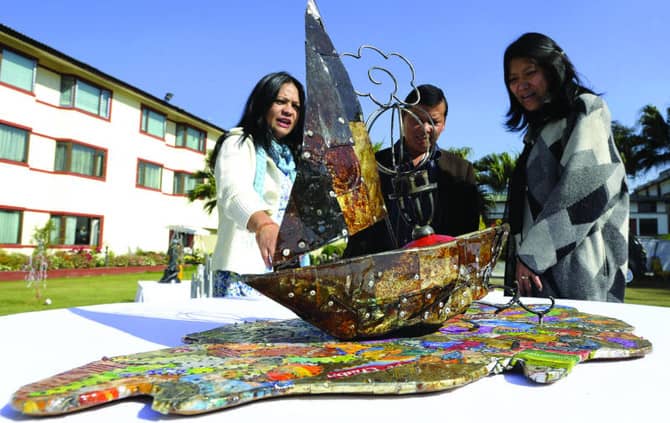 Mount Everest is a part of the Himalayas . Mount Everest is the highest peak ( 8848 metre ) in the world situated in Nepal , spans 2400 km and towers above all like an invincible giant .

How has Mount Everest got Polluted ?

There is an innumerable waste on Mount Everest . Tons of litters is piling up in a scattered way on the surface of Mount Everest . The mountaineers spend weeks on the mountains close to altitude at a series of camps and tents before approaching towards the almost invincible summit .

During that particular phase of their torrid journey a person generates 8 Kg of trash on average . The lion’s share of that wastage gets left on Mount Everest . The slopes are littered vehemently with discarded empty oxygen canisters , abandoned tents , food containers , tented toilets with large collections of barrels . Scientists found humongous quantity of micro plastic pollution on Mount Everest at a spot called “ Balcony “very close to summit .

How are these Litters Detrimental for Habitation ?

The natural environment and ecology gets disturbed by the trash and waste of those aspiring climbers who want to ascend the tip of Mount Everest . This trash and wastes pose a serious health risk to everyone who lives in the Everest watershed .

The Sagarmatha National Park was created in 1976 to protect the mountain and its wildlife was declared ” World Heritage Site ” . In 1979 by UNESCO . It is an important water source for thousands of people living in communities surrounding Mount Everest .

There are no waste management or proper and adequate sanitation facilities in the area . So garbage and sewage are emptied into big pits just outside of local villagers .

How an Aesthetic Art is Made out of Leftovers ?

Multiple innovative and efficacious steps and strategies have been taken to salvage the status quo of Mount Everest . Mount Everest not only dotted with some 200 bodies of past climbers , but also being tormented by a litter ailment . 1.5 tons of garbage from Mount Everest was transformed into 75 sculptures .

In 2007 a Maine artist collected empty oxygen bottles and turned them into bowls , bells and ornaments . In 2012 , fifteen ( 15 ) Nepali artist transformed multiple artistic work from 1.7 tons of trash collected from Mount Everest . The art was on sale for prices from $15 to $2300 . The part of the collected money from sale went to the artists and the rest of the money went to the ESA ( Everest Summiteer’s Association ) which sponsored the collection of garbage from the mountain , organized .

Anyone visiting Mount Everest has to pay $4000 deposit and the money is refunded if the person returns with 8 Kg of garbage . This is the average quantity of litter that a person produces during the climb .

Nepal has taken an innovative strategy to salvage Mount Everest . A museum will be created from the garbage piled up by the mountaineers in Mount Everest .

Tomy Gustafson is the chief supervisor of the entire innovative projects . Under his innovative supervision the local residents , foreign artists will be summoned to actualize this aesthetic art . The organization has already taken the resolution to show the world how an invaluable aesthetic art be created from the waste products .

A worth looking museum will be created at 3780 metre altitude of Mount Everest . There is a base camp from mountaineers to reach the summit . One can take the memento from the museum as a remembrance .

Eco Himal is a national NGO which gets engaged in cleaning the garbage . Finzo Sherpa , on behalf of the organization , said that the organization is going to embark on a new project or venture named “ Carry me Back ” in which every mountaineer will be requested to carry back at least 1 Kg of litter in its bag from Mount Everest .

They have to fetch back those waste products to Lukla and from there the organization takes the responsibility to send those to Kathmandu by air . All the visitors and the mountaineers have to be engaged as a part of this project to salvage the natural aesthetic beauty of Mount Everest .

Mount Everest is our pride and we must make concerted effort to give him a fresh air so that he can breathe fresh air without pollution.

8 thoughts on “How is Aesthetic Art created from the Litters of the Mount Everest ?”